So, we all know the original big three shounen anime manga Bleach, Naruto, and One Piece, right? You might have noticed that there is one thing that all three have in common: they were all inspired and influenced by the same man. His name is Akira Toriyama, the creator of one of the most popular anime series of our time known as Dragon Ball.

Dragon Ball is one of the longest running animes, recently ended in May 2019. If you watch anime and say “I never watched Dragon Ball,” then I suggest you go watch it. But, why would I be talking about something that already finished? Well, the answer is simple. Dragon Ball is one of the biggest anime of all time; it’s so huge that Japan is making Goku their mascot for the 2020 Olympics, also known as the biggest sports event in human history. It is the core of the big three of shounen and you’ll soon learn why.

The series was originally based on a chinese story known as Journey to the West which was one of the top pieces in Asian literature and was widespread across cultures and millenia. It was released on September 10,1985 and ended on August 4,1995. Accompanying the manga was an anime made by Toei Animation which was released on February 26,1986 and ended on January 31, 1996 and was very well received both in the West and in Japan. After the manga ended, Toriyama began to work on the next big series. This was known as Dragon Ball Z which once again, was one of the biggest things to hit Japan (culturally of course.) The manga was released in the Weekly Shonen Jump from 1988 to 1995 with the anime releasing on April 26, 1989 to January 31, 1996 (7 years, if you’re curious). Dragon Ball Z took place right after the original manga and anime took place and it had plenty of amazing scenes that I’m sure will find a way into your heart no matter what.

Dragon Ball Z was one of the most hyped up action anime of it’s time, being dubbed in the United States, Canada, Australia, Europe, India, and Latin America. But, let us take a few minutes to thank the creator for this anime that is loved by millions of anime viewers and manga readers.

Akira Toriyama was born April 5, 1955 (currently 65 years old) and was born in Aichi Prefecture, Japan. Sure, he is known for being the creator of Dragon Ball, but that wasn’t the only thing he ever worked on. He worked on the character designs for the JRPG (Japanese Role Playing Game) known as Chrono Trigger and has gone on to work on other JRPGs such as Dragon Quest and Blue Dragon. He has also worked on a manga known as Dr.Slump which was released from 1980 to 1984 . This was his first manga ever written/illustrated for Weekly Shounen. His most recent manga known as Dragon Ball Super is still going. He has had the opportunity to do illustrations for the mobile game known as Dragon Ball Legends, another video game called Famicom Jump II: Saikyō no Shichinin, and even Dragon Ball FighterZ and Jump Force. He was awarded the Shogakukan Manga Award, given to him for best Shounen (Dr.Slump). If it weren’t for him, shounen manga/anime wouldn’t be as amazing as they are today! That is to say that he took something from a completely different culture and background, and turned it into something brand new, something that no other manga/anime creator had done at that time, creating something that has become a household name for any anime and manga enthusiasts.

Dragon Ball references in other media

Dragon Ball is so well known that you will most likely see it referenced in other media such as video games and what not. A perfect example of this is in Bandai Namco’s Naruto Shippuden: Ultimate Ninja Storm 3 where you could pre-order the game and get an exclusive code to unlock the Goku costume for Naruto Uzumaki. With this costume, whenever he uses Rasengan it looks as if he was holding a kamehameha. This was also done for the game known as Dragon Ball Z:Battle of Z with Goku being able to wear Naruto Uzumaki’s Sage Mode outfit. Another reference is in the anime Blood Lad where the main character Staz is ready to fire a kamehameha. 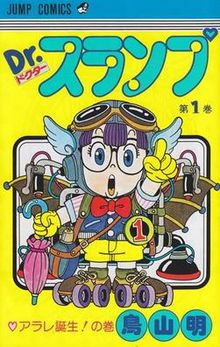 Now, you might be questioning this and thinking “Wait…I thought Akira only worked on Dragon Ball..”. But my friend, you would be wrong. Akira Toriyama has worked on many other projects such as Dr.Slump. Some of his projects were actually never released to the public making them really rare and these projects are called Awawa World and Mysterious Rain Jack. He worked on a few one shot manga known as Wonder Island, Wonder Island 2, Today’s Highlight Island, Tomato Girl Detective, Pola & Roid, Escape, Mad Matic, Pink, Hetappi Manga Kenkyūjo, and Chobit just to name a few. He has also worked on a lot of anime films/TV shows such as Dragon Quest, Blue Dragon, Kosuke & Rikimaru, Go! Go! Ackman, Pink: Water Bandit, and Rain Bandit.

He would also go onto create other projects that aren’t related to any of his other projects. A few examples would be Fuel Album (George Tokoro Album), Fire! Staff Tripper, Polkadot Magic, Journey to the West:Conquering Demons, V Jump, Weekly Jump F-1 Club. Just to name a few.

To make a quick conclusion, if Akira Toriyama never made Dragon Ball then Shounen anime/manga wouldn’t be as well-known as it is today. Thank you all for reading this, and I hope you have a wonderful rest of your day, evening, or night!